A new year always brings new challenges to people with spinal muscular atrophy, and 2012 has been no exception.

On January 9th, I went with my partial caregiver Daniel to the Centro Ann Sullivan del Perú (CASP), a school for people with developmental disorders where I work, to charge the 7-year-old gel batteries of my 1997-made Invacare wheelchair because I was afraid the old chair would stop working if the battery terminals crossed. He plugged the charger cord to the chair first, then into the wall outlet, and I asked the administrative staff working in the training area office to disconnect it from the socket wall when the orange light stopped blinking. On February 1st, I had to be back at work because my holidays ended by then, but destiny had another thing in store for me.

At 11 o’clock in the morning, on January 12th, I was in the Solidarity hospital being diagnosed with retina detachment and was told that I needed a complex, expensive and urgent operation. For a man with spinal muscular atrophy whose only income to survive comes from his wage, the surgery cost was out of reach. However, I was willing to fight for my vision.

Back at home, two hours later, I made a call to Denisse Ramos, a social worker at CASP, and asked her to inform Dr. Liliana Mayo, our General Director, then in Kansas, about my health problem. Later when the effect of dilation drops had gone away, I sent a letter in English to Liliana telling the symptoms I had experienced in the previous days and what I was told in Solidarity, which she forwarded to Dr. Linda Lawrence, ophthalmologist in Salina, Ks, to get her opinion.

At 6 o’clock in the afternoon, after watching the sunset from the main avenue of the neighborhood where I live, I returned home and found 16 missing calls on my cell phone screen. Right away I called Dr. Rosa Oyama, project and research director at CASP, who informed me that I had a retina exam at the Sacro Cuore Clinic the next day, Friday 13th, and that then I would be given a date for my surgery.

At night, reading my copy of mails addressed to other people I learned how my help request had gathered speed since I made my first call. Dr. Mayo had written to Dr. Manuel Pérez Martinot (Director of the Sacro Cuore Eye Institute) as follows: “I am writing you because I would like you to give an appointment for Julio in your eye institute. He is a 62 year-old coworker who fights courageously against the Spinal Muscular Atrophy and we want to know your professional opinion about his retina detachment and see how we can help him,” while Dr. Lawrence wrote to Liliana, “I send to Manolo’s new email and texted him. Someone should call him first thing tomorrow. Dr Wong, the retinal surgeon I believe is there on Friday. Hopefully either he or Manolo could see Julio. We pray that all will be okay.”

On Friday, prayers were being answered. Dr. Carlos Wong, one of the best experts at retina in Peru, examined my right eye exhaustively and confirmed the Solidarity’s diagnosis. Then Dr. Pérez Martinot asked him to schedule me for surgery the next Thursday, January 19th, and instructed his administration to charge me as a social case. As a result, the cost of retinal surgery was cut by 50%. At night, Dr. Mayo gave us (Denisse and me) the green light for the operation, because she had gotten a donor to fund it. The following morning, Saturday, January 14th, health workers from the Centenary Peruvian –Japanese Clinic (such as had happened in Solidarity Hospital) were helping to have ready the pre-operative tests in record time. I only told them that I had SMA, that I was likely the only one with this condition in Peru working full time and didn’t want to lose my sight because I needed to continue earning my life. God did the rest.

The night before the operation, reading mails from friends who sent their thoughts and healing energy to me, who prayed for a perfect outcome, who sent me hugs and their hands to hold my hand as I went through the surgery process; friends of organizations who had called me our voice to Spanish-speaking people and said that I had touched people well beyond my immediate surroundings and a lot of supportive energy would be focused on me as I embraced this new challenge or that they would pray for God’s guidance of the surgeon’s hands and also for my speedy recovery; minutes before I turned the computer off, I received the last one coming from Mississippi. It was from my SMA friends Blake and Matt, who putting themselves in my shoes and knowing how I fought courageously against this deteriorating disorder in a country where severely disabled people are on our own, said to me that help from their family was on the way. At 11 pm I went to bed hopefully optimistic, because the fear of how I was going to pay for the around-the-clock caregivers I needed, medicines and other operation-related expenses and whether the post-operative period would take more than I had supposed began vanishing.

On operation day, at 2 o’clock in the afternoon, the skilled hands of Dr. Wong started repairing my detached retina by using a combination of the Retinopexy and Vitrectomy procedures. So he removed the entire crystalline lens and all the gel, inserted a band to flatten out the retina and used gas to make the retina stick. Three hours later, the surgery ended and the performance was described as brilliant according to a medical report.

Living on my own in a 50 square meter house and needing a more spacious place to be cared for by caregivers and visited by my brothers Miguel and César, both of whom are nearing eighty years of age, Dr. Mayo’s invitation to go to the center to spend the post-operative phase was like a gift sent from heaven, which I accepted immediately. So there I went with Domingo, Martin and Daniel who care for me the whole day, especially the first three weeks because I had to sleep on my stomach and/or keep my head down for the gas to make the retina stick. It was not easy or comfortable, but they helped me make it through.

On March 5, I celebrated my 63rd birthday, and this special day found me as usual working in the training area of the Ann Sullivan Center. During my checkup on March 9th, Dr. Wong examined my attached retina and said to me, “Julio, congratulations (and congratulations also to him), the retina will last more than you can live (2025 in my mind) and your vision will improve when the intraocular len will be placed. Perhaps, on April 20th, we will fix the date.” God through good-hearted people made this miracle possible! God bless them always!

My gratitude is extensive to Dr. Liliana Mayo and the Centro Ann Sullivan; Dr. Manuel Pérez Martinot, Dr. Carlos Wong who made the miracle, and the staff at the Sacro Cuore Clinic that was very nice to me; Dr. Linda Lawrence whose help was crucial, Ana Mayo from Spain who did her bit and the Watson family who tipped the scales in my favor in this fight.

Thanks also go to my brothers for being with me on this long struggle, friends who sent me their best wishes and Mrs. Chantal Fort de Peschiera who kept friends updated about my operation and recovery process.

Thanks from the heart 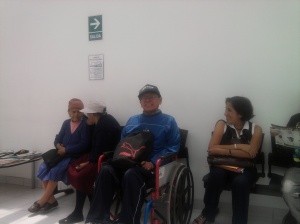 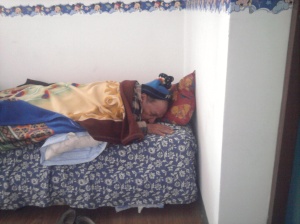 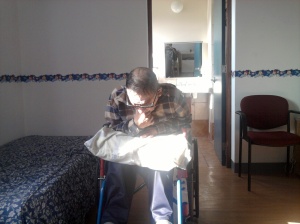